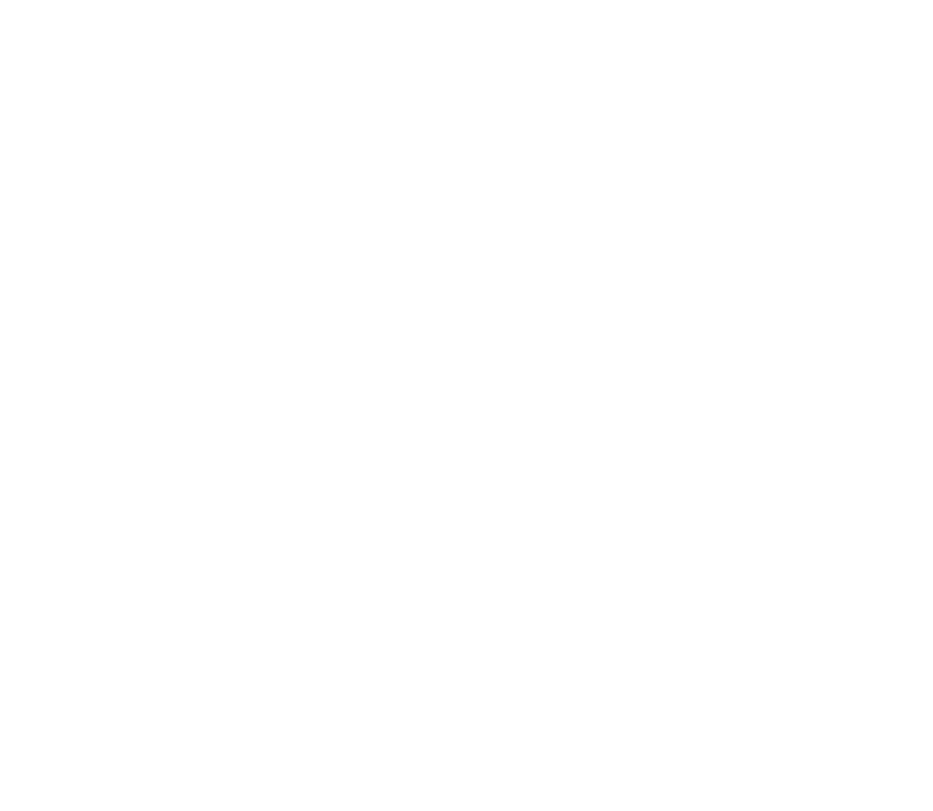 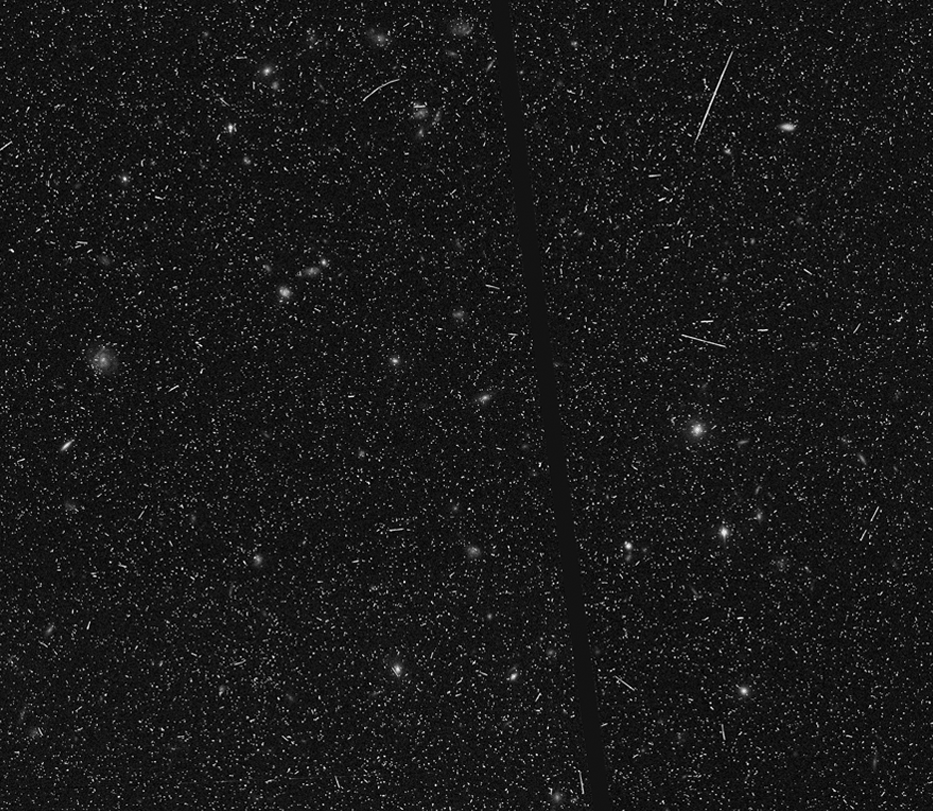 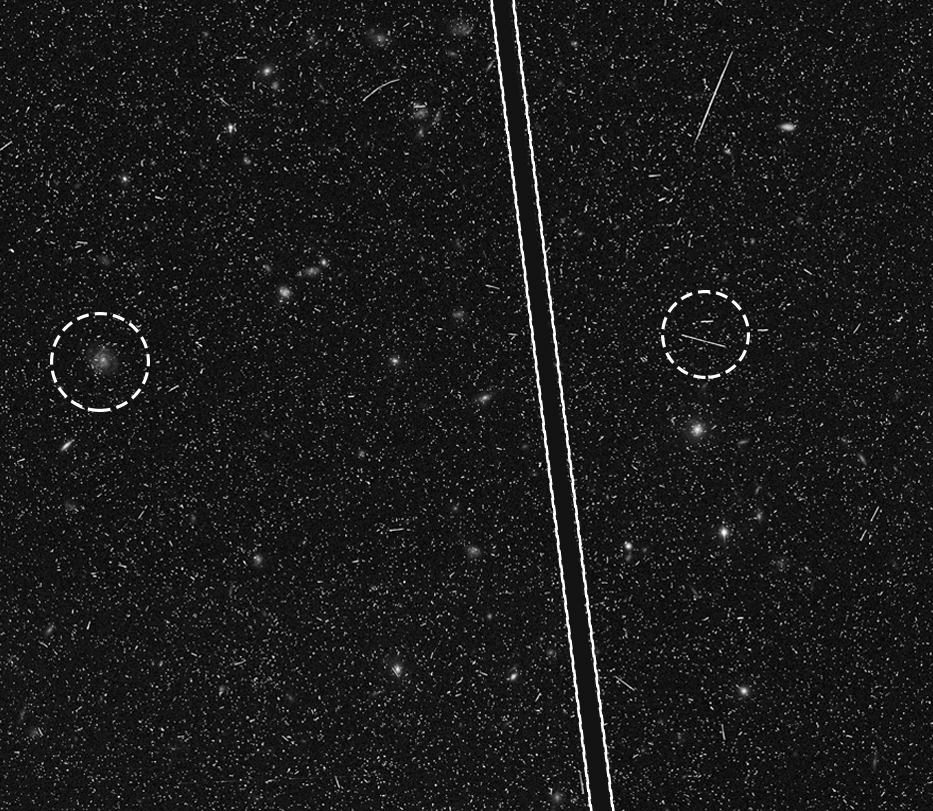 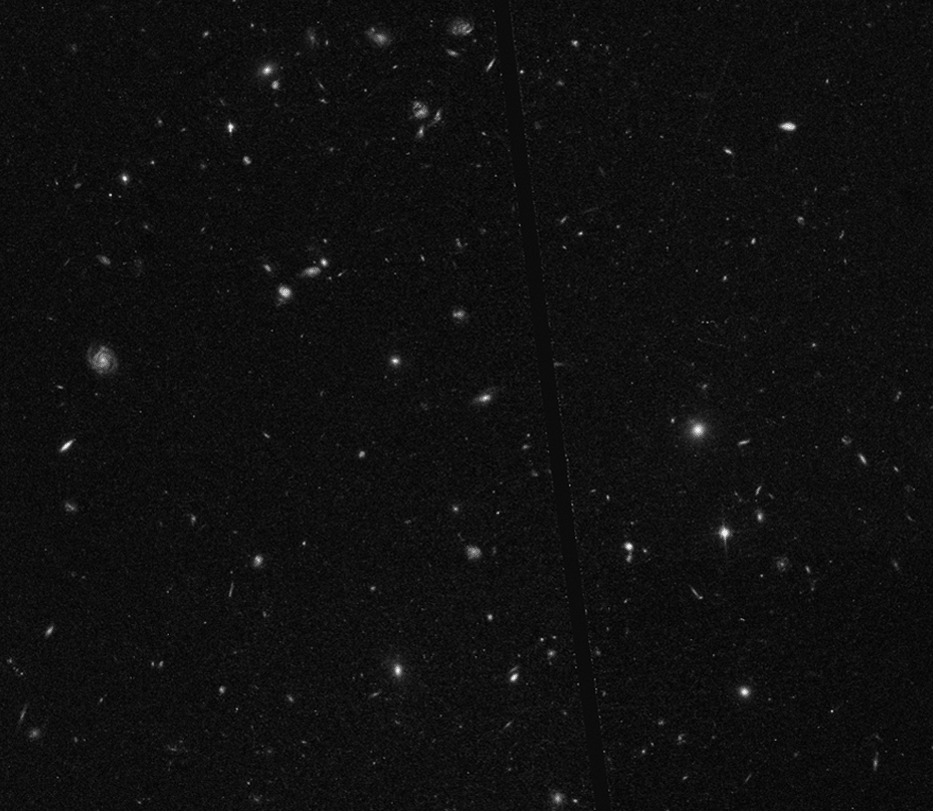 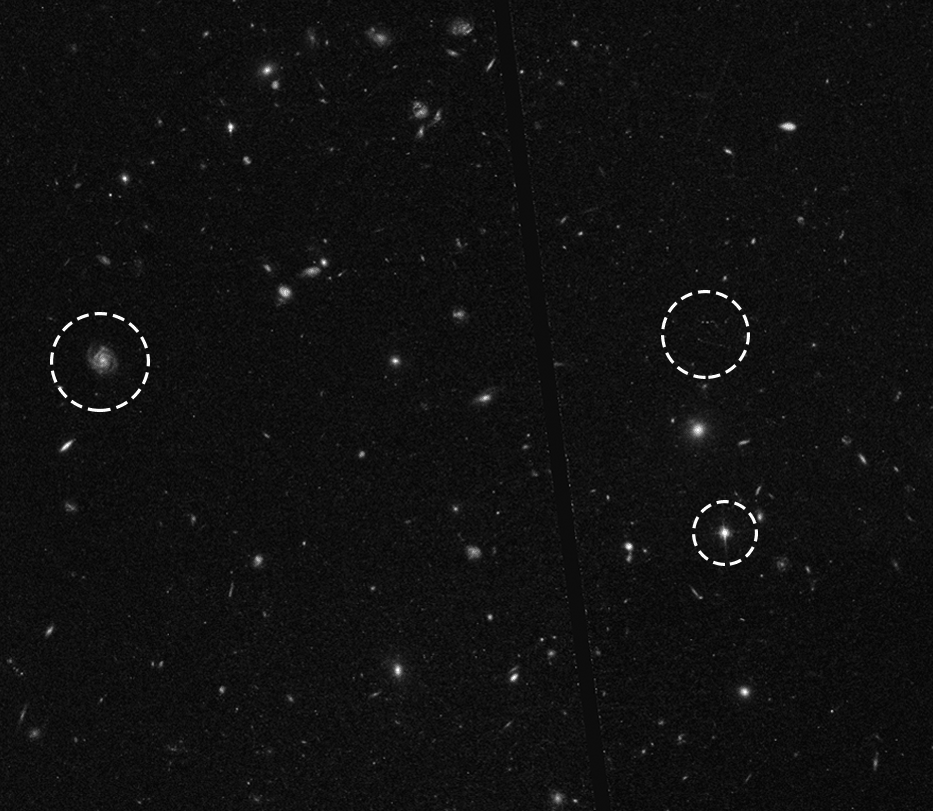 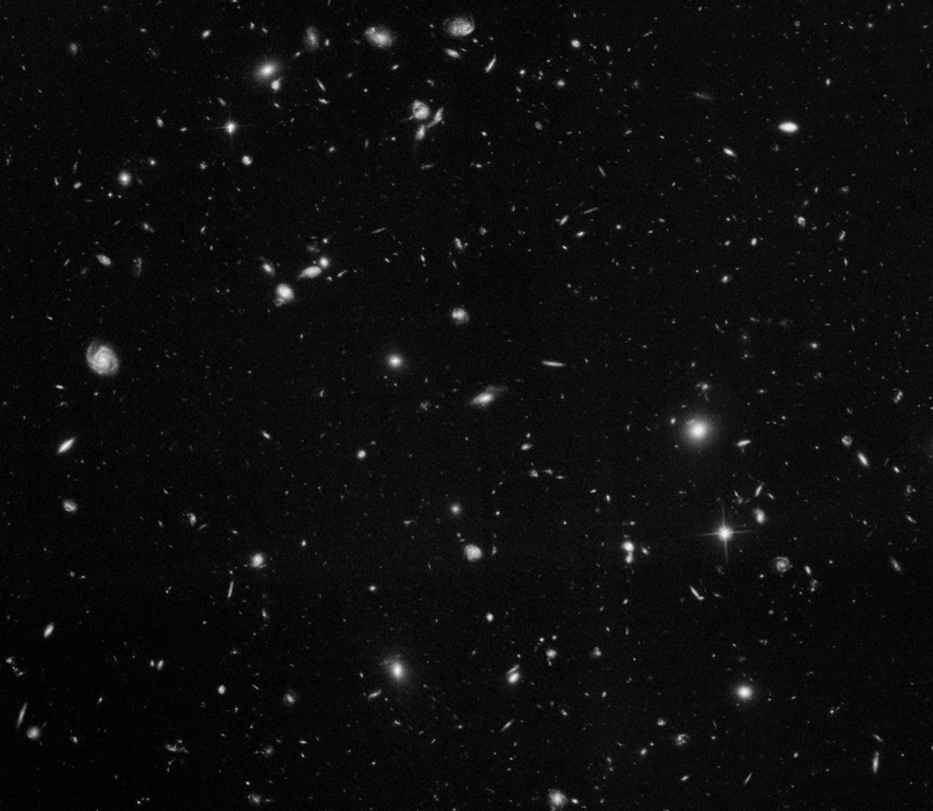 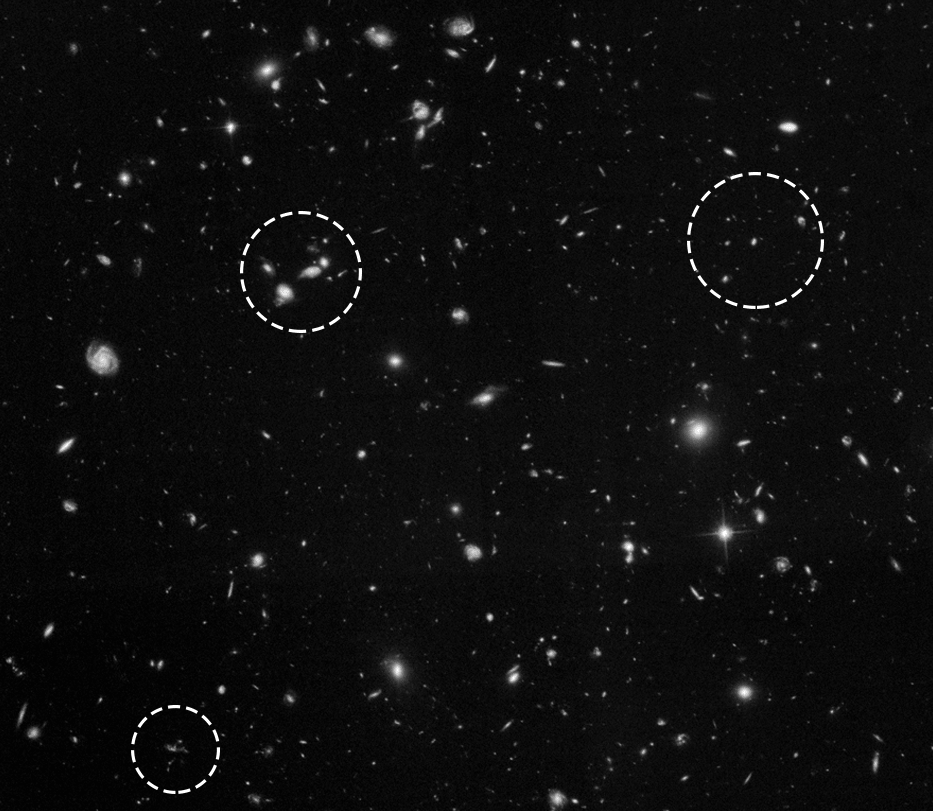 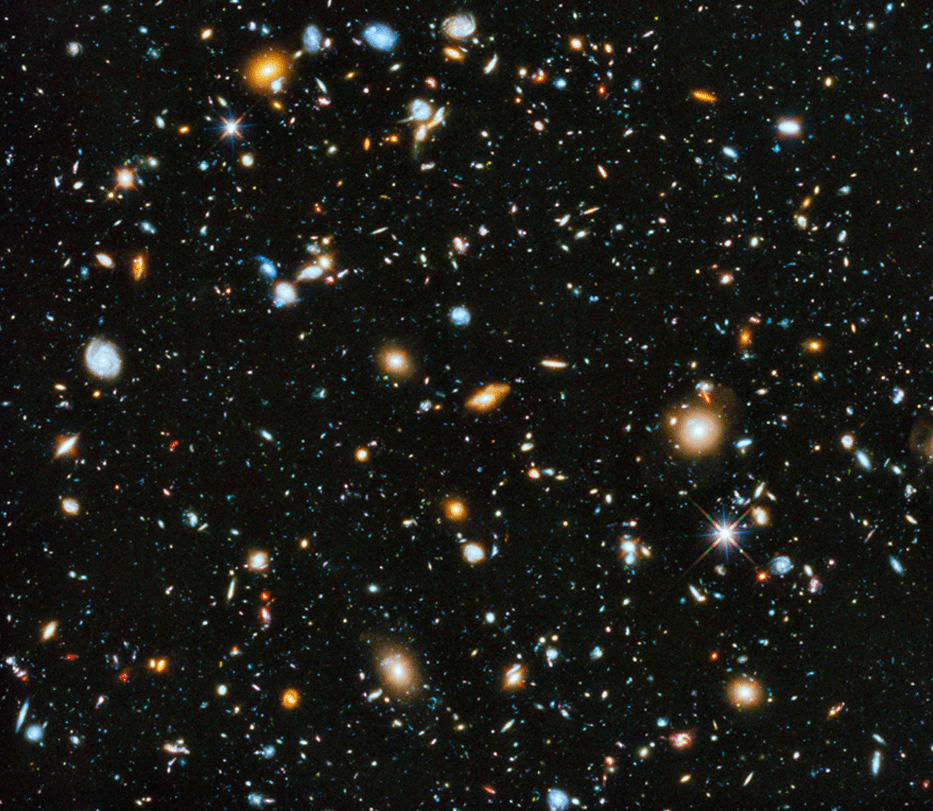 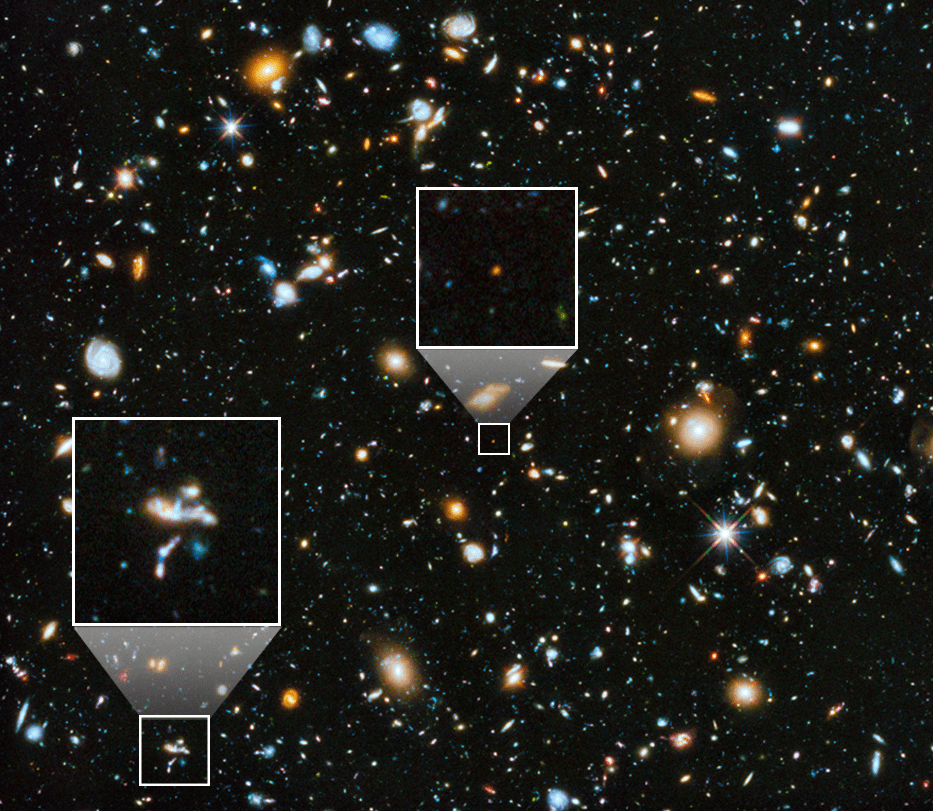 To the eye, this part of the sky appears completely dark and empty, even when viewed through a telescope.

The sky is not empty after all, but it’s hard to distinguish between random noise and actual sources of light.

After adding several exposures together, real objects begin to emerge from background noise.

Looking at one patch of sky for an extended period of time allow us to see details that are otherwise too faint, small, or distant to distinguish.

If you have ever used manual camera controls to photograph in low light, you know that the darker it is, the longer the exposure needs to be. Keeping the camera shutter open longer allows more light to reach the film or detectors. The same is true for a telescope. The more light a telescope can gather, the fainter and more distant the objects it allows us to see.

One way to increase the amount of light a telescope collects is by increasing the amount of time it spends pointed at a particular part of the sky. This is done both by taking extremely long exposures and by adding many separate exposures of the same area together. While one exposure may reveal the presence of a bright source like a star or galaxy, it might not provide much detail, and it won’t reveal dimmer light sources at all. A single exposure is also likely to have a lot of noise from cosmic rays (high-energy charged particles from the Sun and other sources) or random electrical fluctuations in the light detector. When many exposures are added together, noise gets canceled out and real sources of light emerge, becoming brighter and more detailed.

Long combined-exposure times (tens to hundreds of hours) are particularly useful for looking deep into the universe and creating so-called “deep field” images that reveal the most distant objects known. The images shown here reveal more than 10,000 galaxies of different sizes, shapes, colors, distances, ages, and stages of development in a tiny portion of the sky. The black-and-white images capture a single wavelength of near-infrared light. The full-color image is a combination of various colors of visible light, along with ultraviolet and infrared light.

Location in the sky: Fornax Constellation

Most distant object: More than 13 billion light-years away

Did you know: The complete Hubble Ultra Deep Field 2014 is a composite of thousands of separate exposures, totaling over 2 million seconds of observing time.