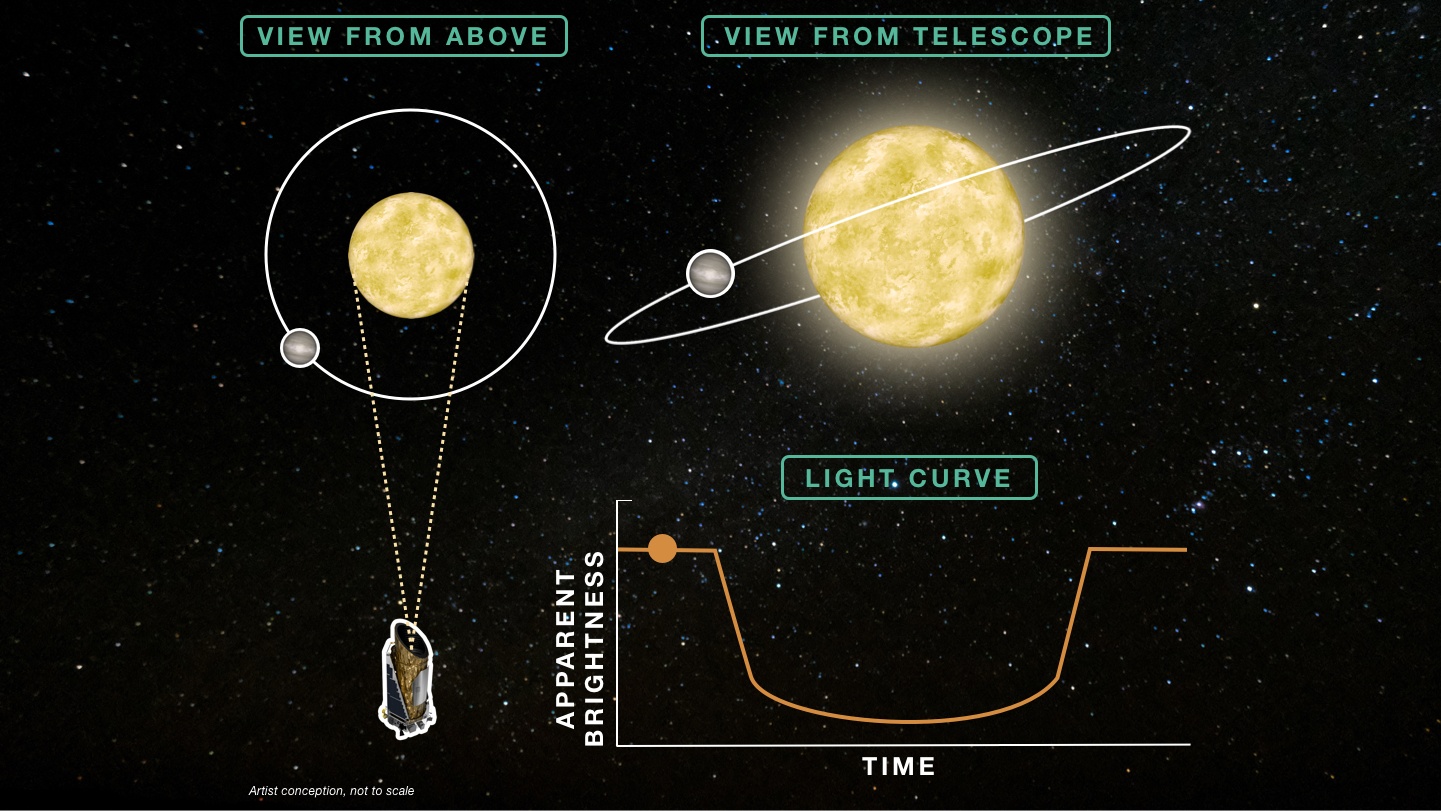 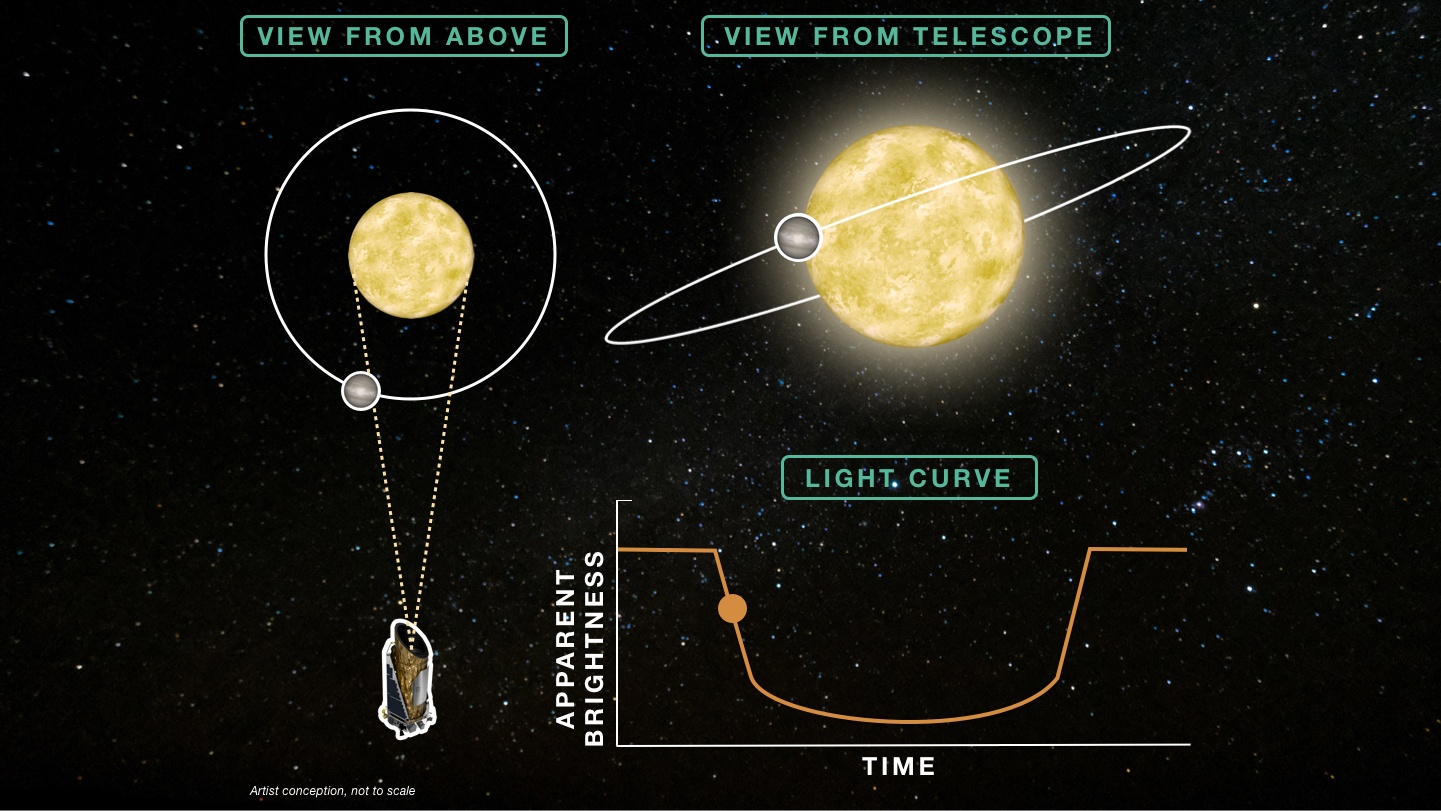 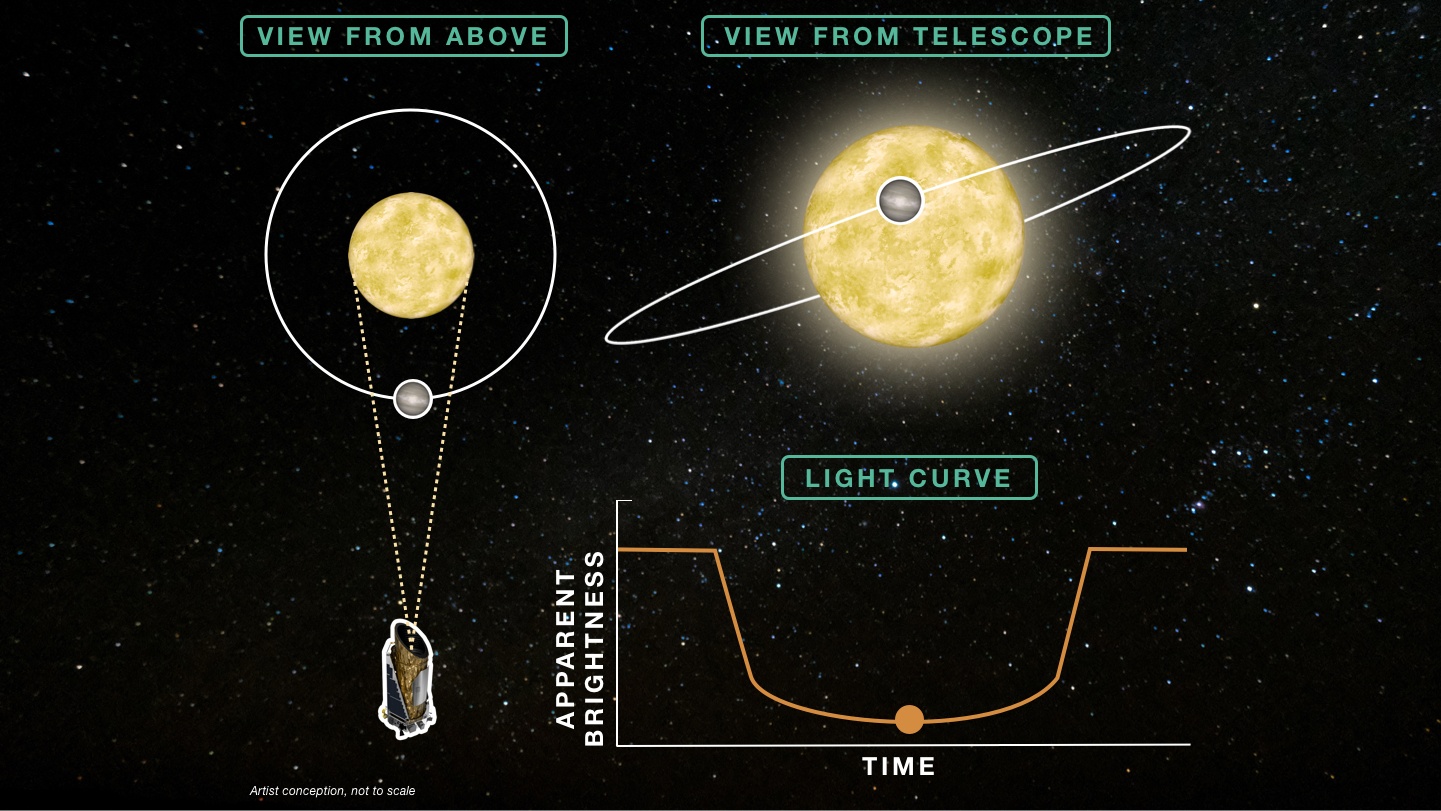 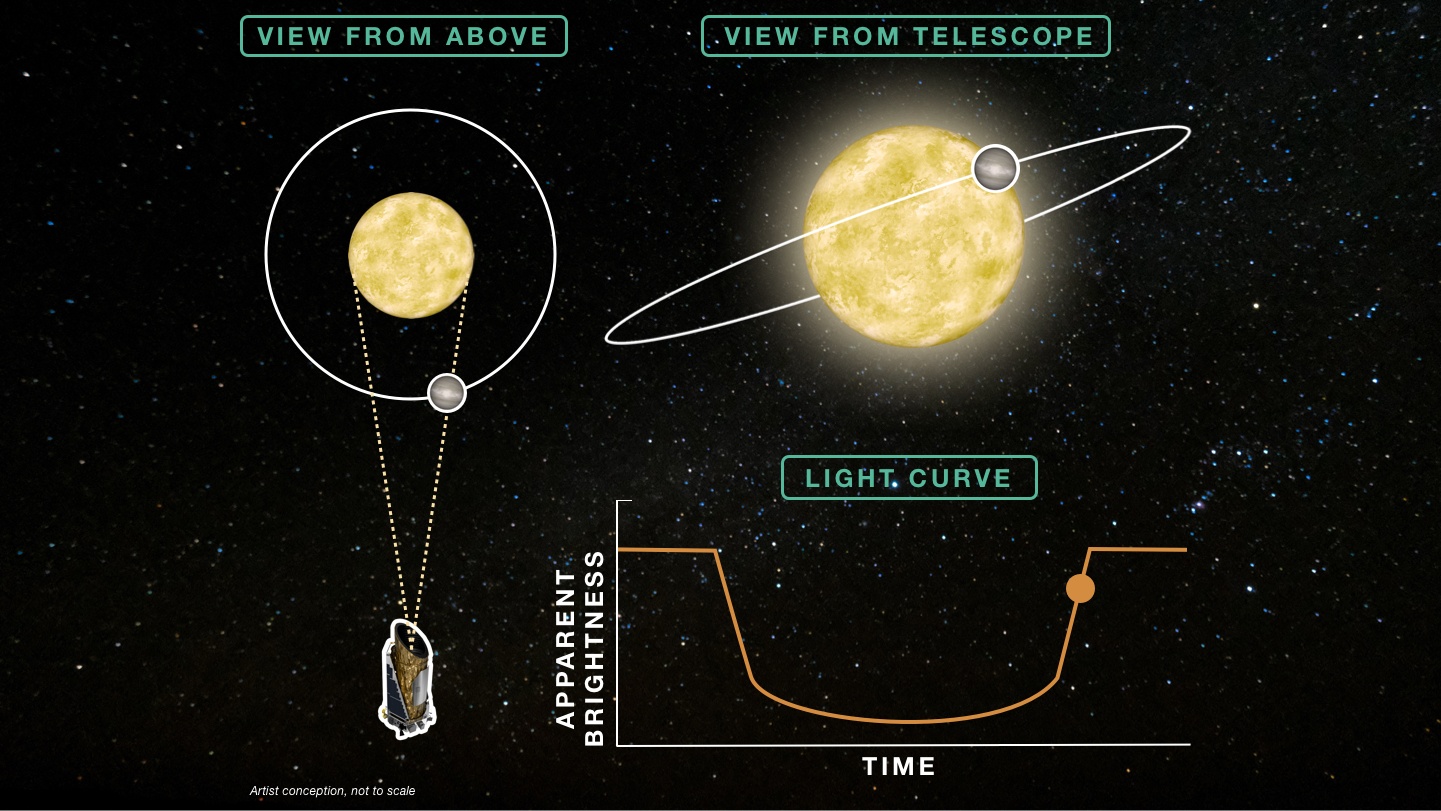 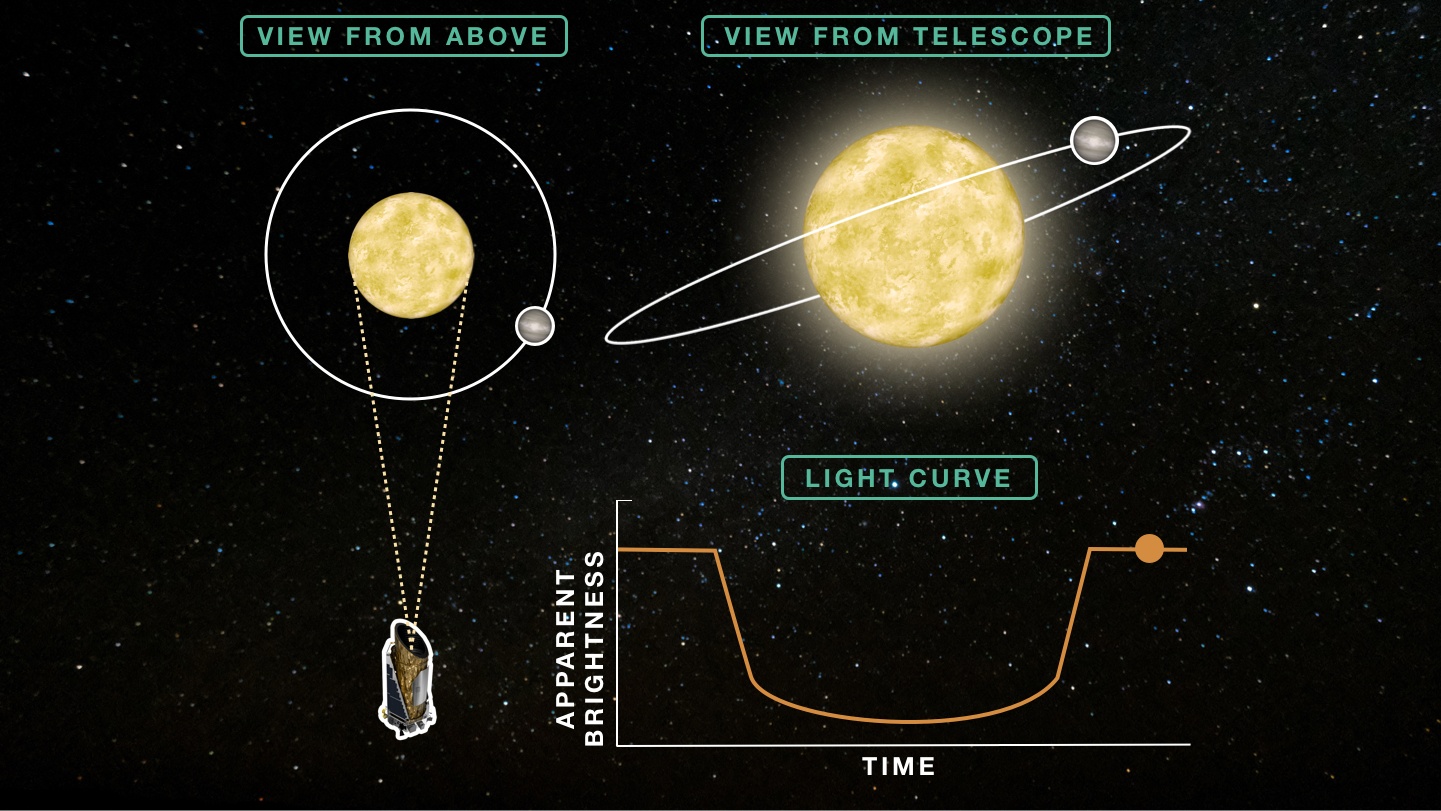 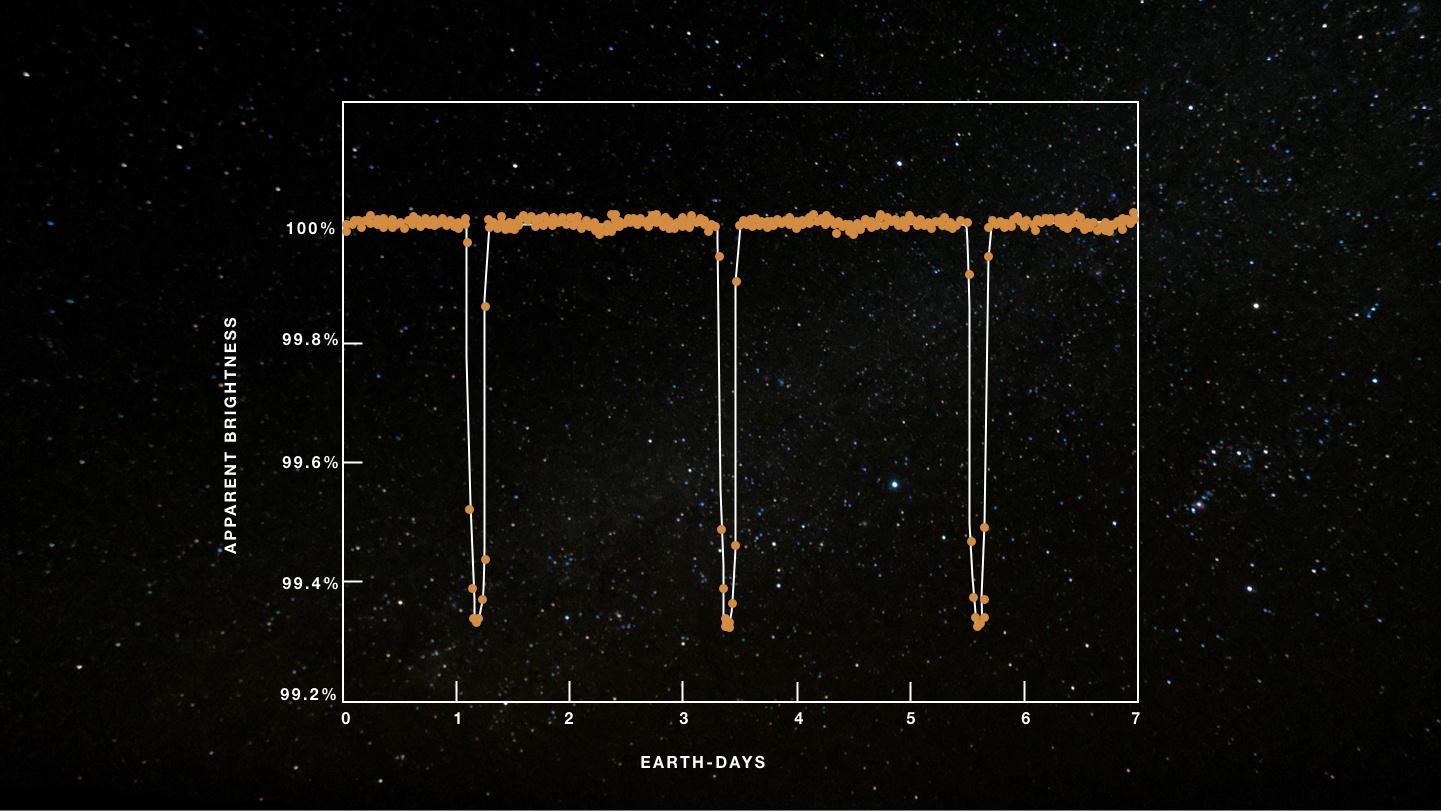 Before the transit begins, none of the starlight is blocked.

As the transit begins, the brightness of the star decreases slightly.

The brightness of the star appears lowest in the middle of the transit, when the planet is between the star and the telescope.

As the planet completes its transit, the brightness of the star appears to increase.

When the transit is complete, the star is back to its normal apparent brightness.

A regular pattern of brightness dips is evidence that a planet is orbiting the star.

We can detect planets by analyzing starlight.

Scientists have detected thousands of exoplanets: planets orbiting stars other than the Sun. We have seen only a few exoplanets directly, but we can detect them by measuring the effects they have on the stars they orbit.

One effect a planet can have is to block some of the star’s light as it passes between the star and the telescope. This is known as a transit. As an exoplanet transits its star, the star appears to dim very slightly. Although the planet itself is too far away to see, we can detect slight changes in the brightness of the star. If we observe a pattern—if the same change in brightness happens a few times at regular intervals—we can infer that a planet is orbiting the star. Analyzing the brightness pattern, or light curve, of the star also helps us figure out the time it takes the planet to orbit (the length of the planet’s year), the size of the planet, and how close it is to its star.

The light curve shown here is based on Kepler space telescope observations of the star HAT-P-7 and its exoplanet HAT-P-7 b, which was discovered in 2008. Kepler has been used to detect more than 2,300 planets using the transit method. HAT-P-7 b’s large size relative to its star, along with its short orbital period of just over two days, made it relatively easy to detect using the transit method. Because of its size, mass, and high surface temperature, HAT-P-7 b is classified as a “Hot Jupiter” exoplanet.

Distance from Earth: about 1,100 light-years

Size: 1.36 times the radius of Jupiter

Mass: 1.8 times the mass of Jupiter

Location in the sky: Cygnus Constellation

Location in the universe: orbiting star HAT-P-7, inside the Milky Way Galaxy

Did you know: Other observations of HAT-P-7 b suggest that it has aluminum oxide vapor in its atmosphere. On Earth, aluminum oxide exists as rubies, sapphires, and other forms of the mineral corundum.

Explore More About Detecting Other Worlds

Astroviz
5 Ways to Find an Exoplanet

Transit light curves from data collected by the Kepler space telescope, with plots and interpretations based on the work of Dr. Andrew Vanderburg