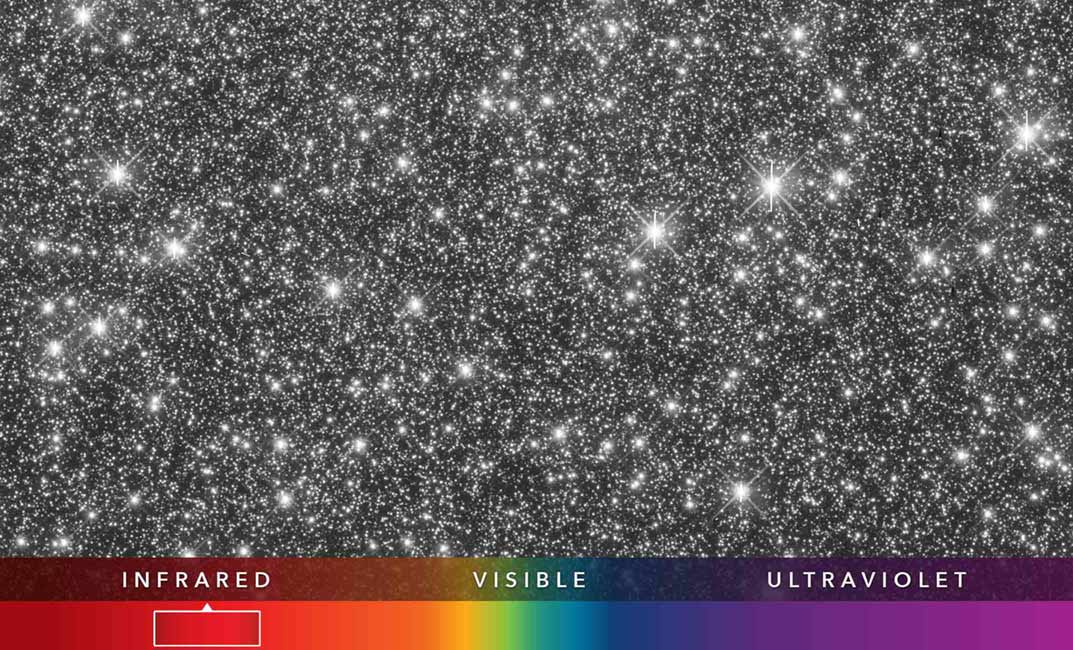 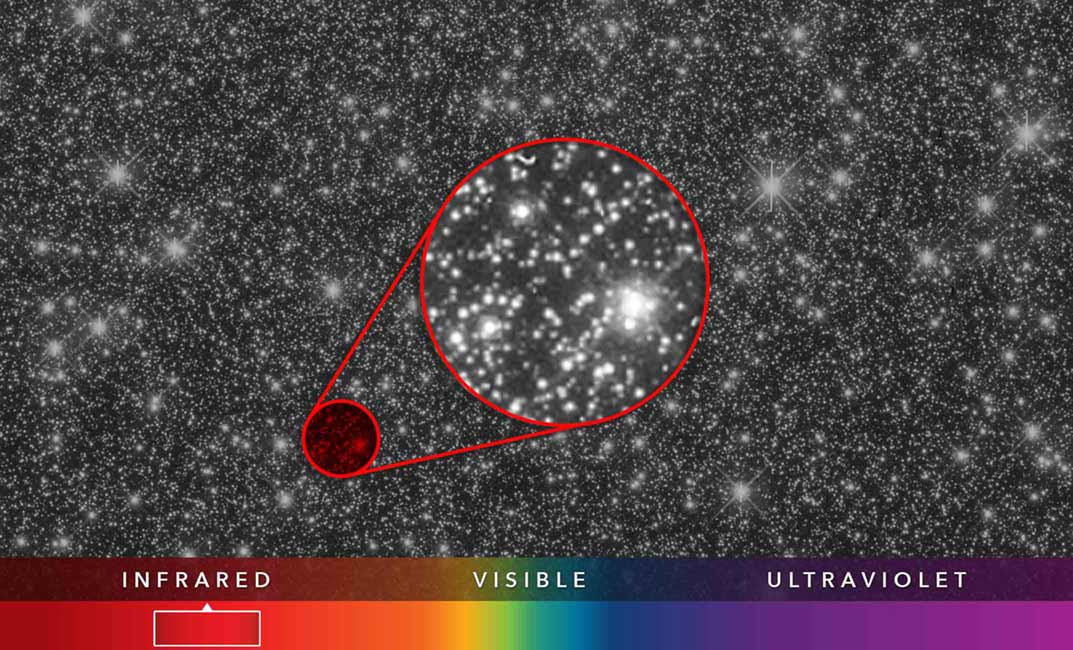 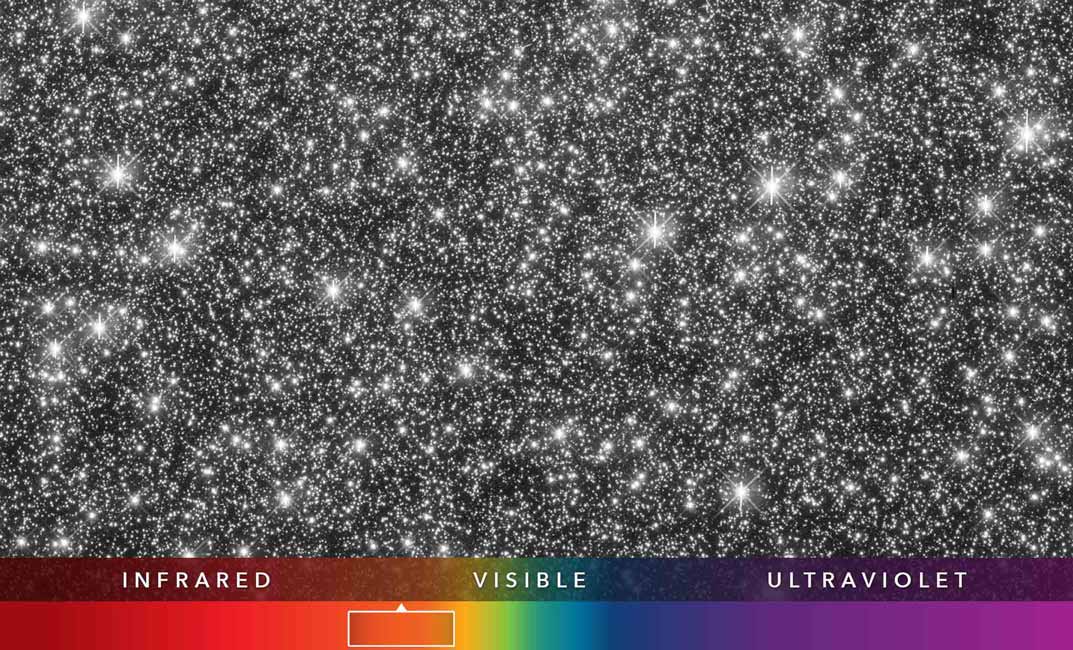 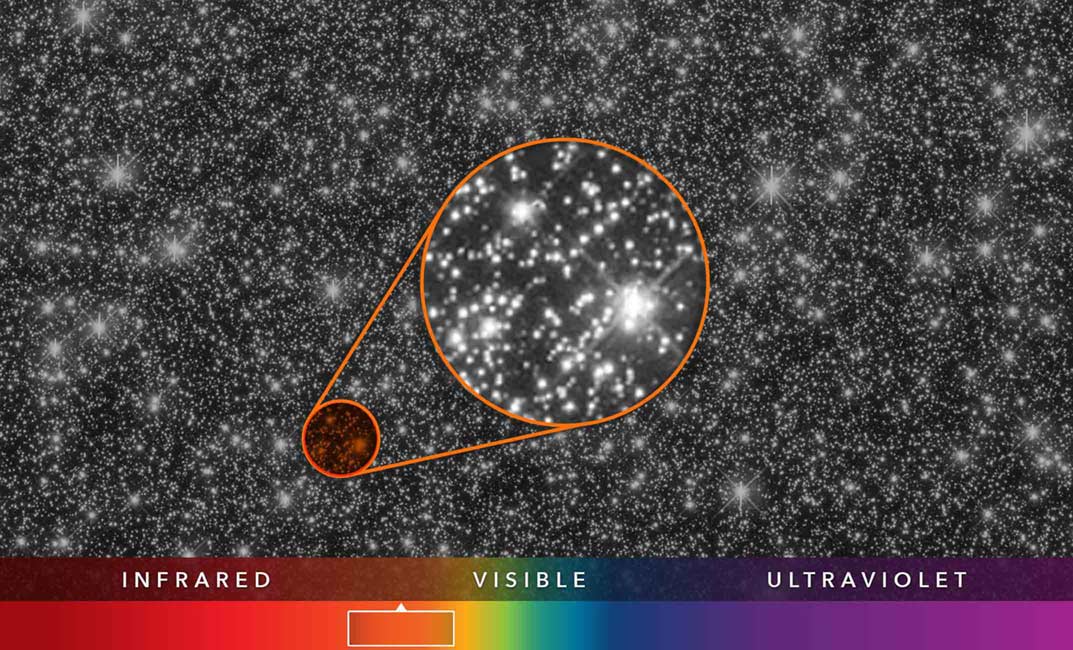 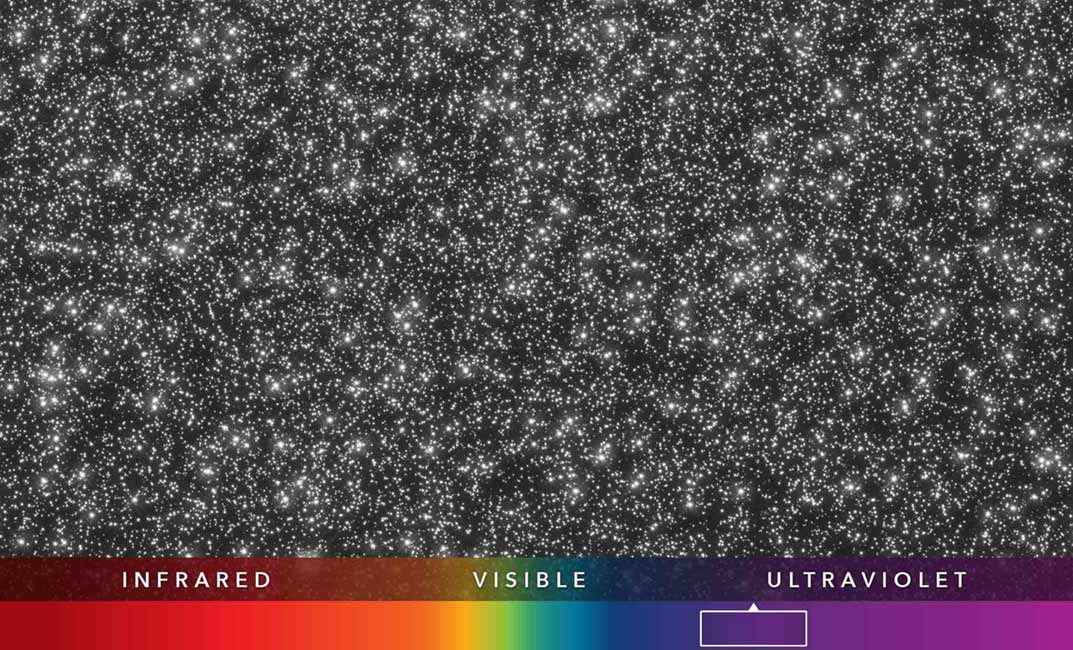 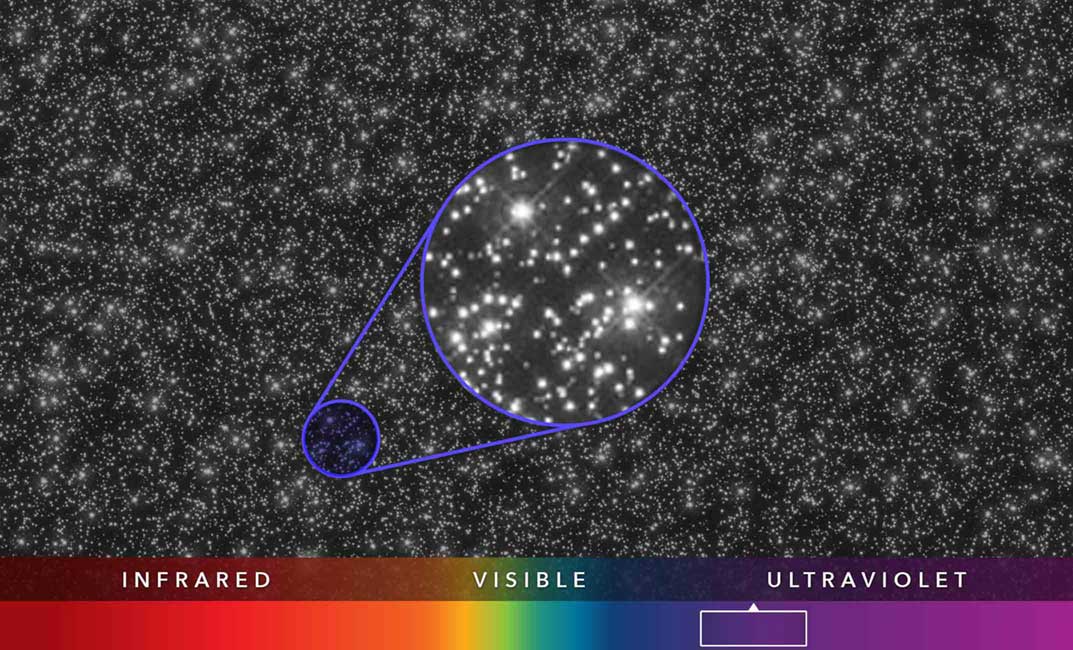 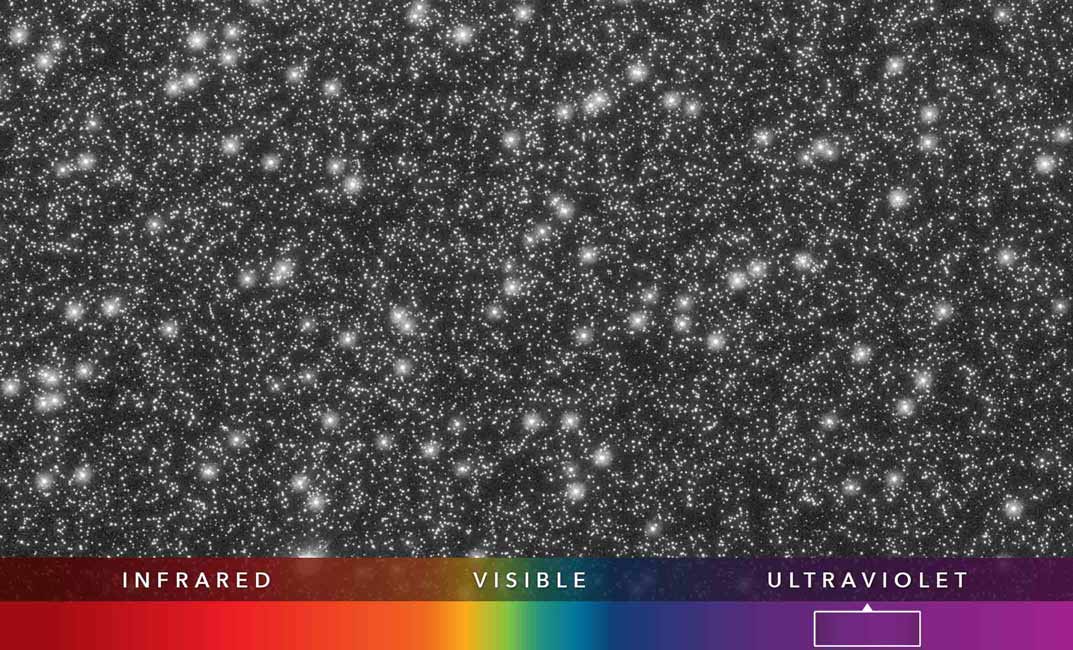 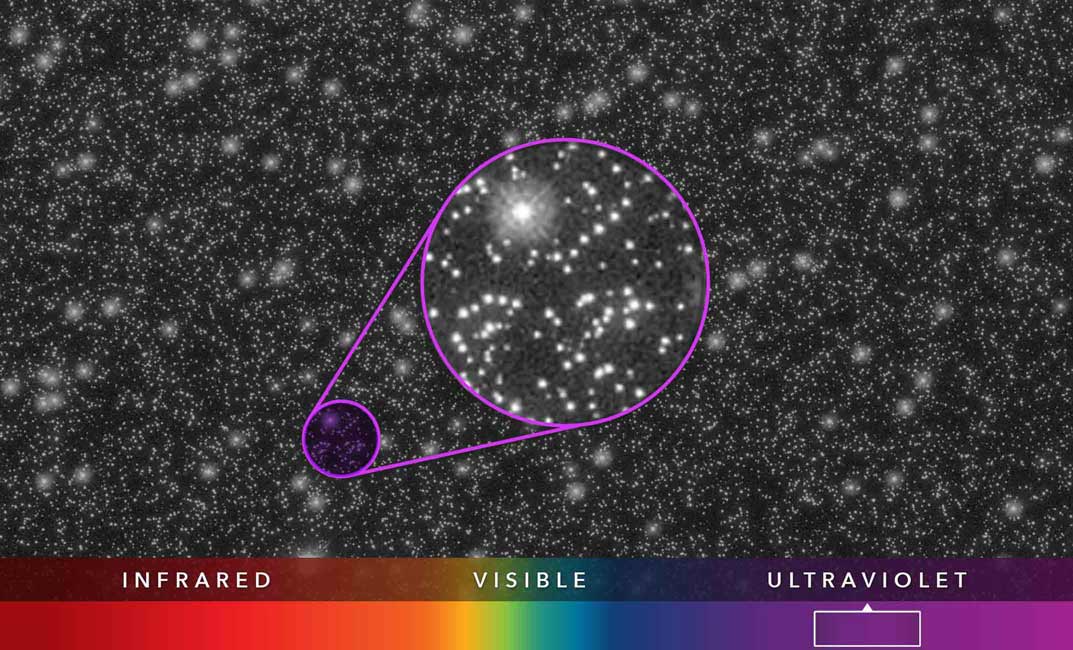 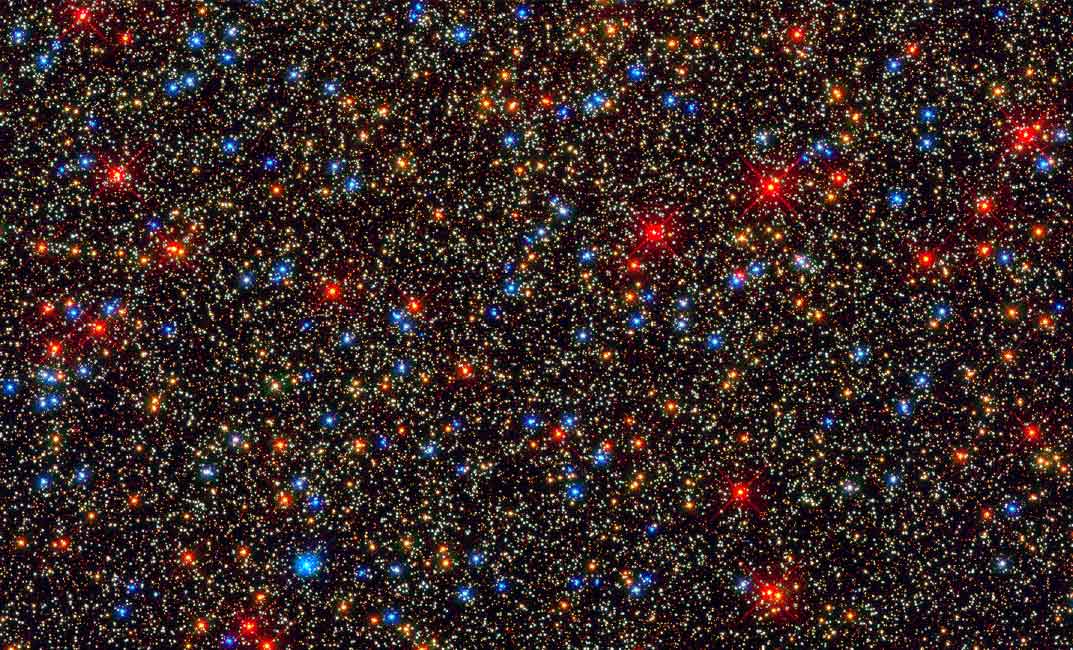 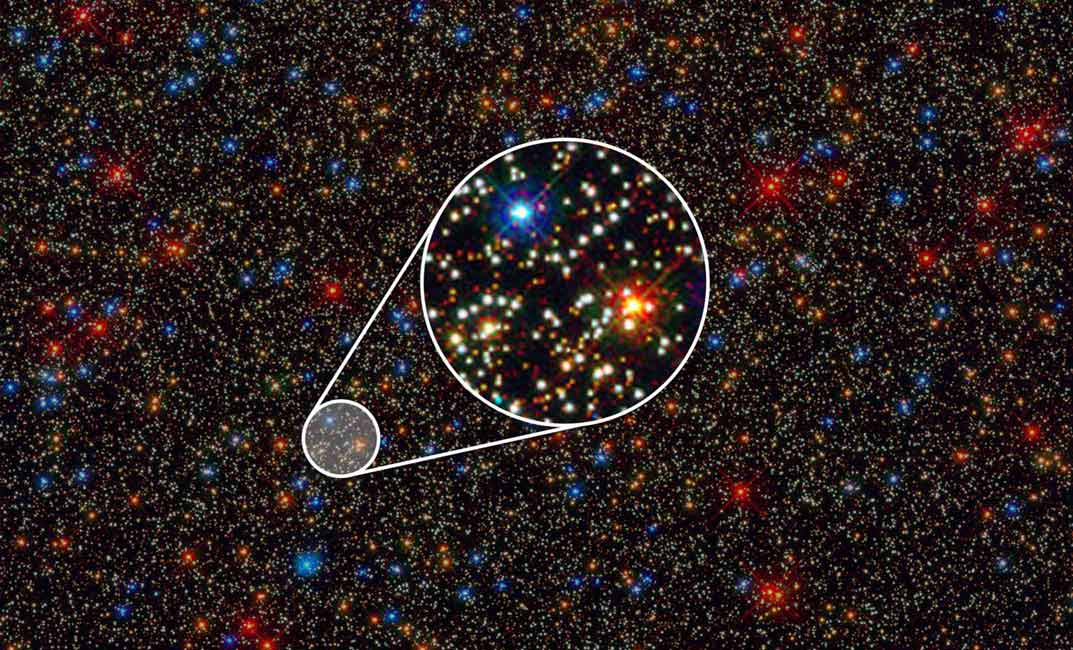 Although all stars emit light in a variety of wavelengths, those that stand out in one view tell us more about their makeup.

Orange dwarf stars are small and cool, lead long lives over billions of years, and stand out in visible light.

Yellow dwarf stars are hotter than red giants and orange dwarf stars, and are detected in near-ultraviolet light.

Stars at the end of their lives, which have exposed, hot cores, are brightest in this view.

Since all of these stars are about the same distance from Earth, researchers can compare their brightnesses and temperatures.

A Story Of Forms of Light: Omega Centauri

Mapping the lifecycle of stars with light.

Human eyes have evolved to detect the rainbow of colors that make up visible light. Some objects, like stars and light bulbs, emit their own light. Other matter, like plants and animals, can be detected because they reflect visible light from other sources.

Visible light is only one form of light. There are other types of electromagnetic radiation that human eyes cannot see. Objects that do not give off their own visible light (and are therefore invisible to our eyes in the dark) can glow in other wavelengths, like infrared or ultraviolet. The entire range of light, from radio waves to gamma rays, is known as the electromagnetic spectrum.

Omega Centauri is among the biggest and most massive globular star clusters that orbit our Milky Way galaxy, and has been observed across the electromagnetic spectrum. The average distance between any two stars in the cluster’s crowded core is only about a third of a light-year, roughly 13 times closer than our sun’s nearest stellar neighbor, Proxima Centauri. Since its stars are all approximately the same distance from Earth, researchers have used Omega Centauri to plot the brightness of individual stars. The color indicates the temperature of the star. Hotter stars appear bluer and cooler stars appear redder. Astronomers compare the brightnesses and colors of individual stars to create what’s known as the Hertzsprung-Russell diagram.

Size: Entire cluster is about 150 light-years across, approximately 6 light-years shown above

Did you know: When ancient astronomer Ptolemy identified this object 2,000 years ago, he thought it was a single star, but it’s now known to contain nearly 10 million stars.