First Evidence for a Planet in Another Galaxy

A discovery demonstrates a new way to search for planets outside the Milky Way galaxy.


First Evidence for a Planet in Another Galaxy
(SPEECH)
[SOFT MUSIC]
(DESCRIPTION)
A blue and white surface of a planet from space. Text, Where could life exist? Is there anything out there? Lines move from under the text to the question, Are we alone? Screen fades to black and leaves the question, which then fades to black.
Text, First Evidence for a Planet in Another Galaxy. NASA/JPL-Cal tech. Since the 1990s, scientists have been detecting the presence of exoplanets -- planets orbiting stars other than our sun. A planet against a black sky.
Text, One method of finding such planets is through imaging. A diagram of a star and two exoplanets.
Text, Another method involves detecting the tiny wobbles of stars as orbiting planets exert gravitational tugs. A model of a planet as it orbits a star.
Text, And another involves recording small, regular dips in a star's brightness as an orbiting planet transits, passing in front of the star from our viewpoint. A scale below show changes in brightness over time.
Text, Using these methods, more than 4,000 exoplanets have been confirmed in our neighborhood of the Milky Way galaxy. A model of many planets with stars in the background.
Text, Scientists expect that exoplanets exist around stars in other galaxies too. A spiral galaxy moves up.
Text, But stars in these galaxies are too far away for us to use our current planet-finding techniques. The image focuses in on stars in the outer arms.
Text, Yet some scientists suggested that a remote transit detection technique might be possible.
Text, The new technique targets systems in which the collapsed core of a formerly massive star is in close orbit with a companion star. A swirl of red in to yellow with a haze out towards a star.
Text, In such stellar pairs, the collapsed core, a super-dense neutron star or black hole, draws material from its companion star, and a disk of swirling gas forms around it.
The gas in the inner part of the disk gets so hot that it emits fierce amounts of X-rays. The image moves in toward the swirl of red in the exterior through yellow to white in the interior.
A swirl of light with purple highlights. Text, These compact sources of X-ray light can be observed from Earth, even in distant galaxies.
Text, If a planet passes in front of the X-ray source, we might see a dip in X-ray light, signaling the presence of the planet. In an inset image, a star with a circle around it disappears, then reappears.
Text, Scientists studied data from two X-ray telescopes -- Chandra and the European Space Agency's X.M.M.-Newton -- looking at X-ray sources in several galaxies. A model of a telescope.
Text, In the nearby spiral galaxy M51, they found a system called M51-U.S.L. dash 1 that showed a dip in brightness that lasted for three hours. A box highlights M51-U.S.L. dash 1.
Text, What do they think caused the temporary drop in X-ray light? The red and yellow disk swirls.
Text, The most likely cause is a Saturn-sized planet passing in front of the X-ray source as it orbits. As the disk swirls, a planet moves across it toward a large planet on the side.
Text, If so, it's the first planet candidate detection outside of our galaxy. The planet remains near the center of the swirl.
Text, The planet candidate appears to orbit far enough away from the stellar pair to exist in a stable orbit. The image moves closer as the planet remains near the center of the swirl.
Text, But it won't likely come around again to repeat the transit for about 70 years.
A large galaxy and several smaller ones against a black sky. Text, Although confirmation will have to wait, the observation demonstrates a new way to search for planets beyond the confines of our Milky Way galaxy. Citation, E.S.A./Hubble & NASA, W. Harris; Acknowledgement: L. Schatz 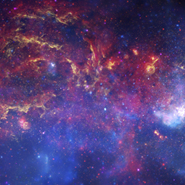