Over thousands of years, skywatchers have observed and speculated about the Orion Nebula, building understanding that continues to this day.


[AMBIENT MUSIC]
(DESCRIPTION)
An amorphous shape of white with some rust and blue, with stars throughout. Text, Orion's Fire.
What astronomers today call the Orion Nebula has fascinated skywatchers for thousands of years -- for good reason. At 1,500 light-years away, it is the closest massive star-forming region to Earth. Stars recede into the distance.
Text, On a clear dark night, the Orion Nebula can be seen from the surface of Earth without the aid of a telescope.
Thousands of years ago, before electricity lit up our nights and masked our view, the nebula was likely even clearer.
Since at least as early as the 8th century, Maya astronomers carefully tracked the stars and the planet Venus by eye. Ancient Mayan drawings.
Text, Maya astronomers kept detailed records and accurate calendars.
The unique features of the Orion Nebula did not go unnoticed. The nebula and night sky above trees.
Text, It was bright, but not a pinpoint like other stars
The nebula was...fuzzy. Smudgy. Bright like a fire, with smoke. An expanse of light near bright stars.
Text, For the Maya, setting the place for the hearth fire with three stones has long been the important first step in establishing a home.
It is also a key element in their origin story, which they saw written in the night sky. Three bright stars in a row above others.
Text, Three stones were laid by deities at the start of a new era. Three stars form points of a triangle.
Text, At the center of the hearth is the "fire of creation" -- what today is called the Orion Nebula.
Maya astronomers calculated the beginning of their era to a specific date thousands of years in the past. Carved stones.
Text, Modern computers confirm the accuracy of Maya calculations:
As the Sun reached its height on August 13. 31 14 B C E, the "fire of creation" was directly opposite in the underworld. From there, the Maya maize deity was reborn, as a new era began.
Some 900 years after the Maya creation epic was recorded, the first telescopes were used to get a better look at the nebula.
Early adopters of the telescope associated the nebula and surrounding stars with the Greek constellation of the hunter, Orion. Observations showed the middle star of Orion's sword surrounded by a "small illuminated cloud" -- the same distinction noted by Maya astronomers.
Inventive adaptations of the telescope improved resolution.
An early telescope. Text,Telescopes at this time did not capture images, so astronomers drew what they saw.
Meanwhile, the improved view led to new speculation about the nature of the Orion Nebula.
Quote, "Saw the lucid Spot in Orion's Sword... it was not as Dr. Smith has delineated it... "From this we may infer that there are undoubtedly changes among the fixt stars, and perhaps from careful observation of this Spot something might be concluded concerning the Nature of it." End quote, --William Hershel, 1774
Careful observation of the Orion Nebula did continue. The first photographic image of the nebula was captured in 1880, one of the first images of deep space. The quest for better and better images has been on ever since... First photograph.
Text, In 1990 NASA's Hubble Space Telescope was launched into orbit to avoid the haze of Earth's atmosphere and capture sharper images.
This image of the Orion Nebula was created in 2005. An amorphous image of light and stars.
the nebula's complex structure of gas and dust is displayed, shaped into a cavern surrounding four massive young stars.
Detailed data from space-based telescopes provide clues to stars' cycle of formation, nuclear fusion, and "death."
Through this cyclical process, stars create heavy elements, including the carbon and oxygen that make life as we know it possible.
Our sun was likely formed in an environment like the Orion Nebula. A model image, Text, Visualization.
Our solar system, Earth, and everything on it -- including us -- formed from something like this.
Advanced space telescopes have confirmed what previous skywatchers suspected -- space is a dynamic place, and the creation the Maya conceptualized is indeed taking place in the Orion Nebula.
A temple beneath the Orion Nebula. Text, Temple of Kukulkan, Copyright, Stephane GUISARD

Flight Through the Orion Nebula
Reveal a glowing gaseous landscape 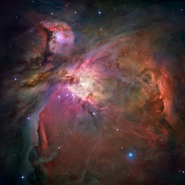